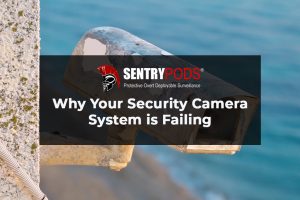 With that in mind, here are a few reasons why your security camera system may be failing you.

It’s much easier for nefarious deeds to proceed uninterrupted in low-lit areas – whether the lack of light is coming from the job site itself, or from a lack of street lights surrounding the area. With low light comes a decreased level of performance from your surveillance system, since darkness impedes a camera’s ability to pick up on crucial details of trespassers such as defining facial features, license plates, and vehicle makes and models. And while it may be hard to believe, this is true even of some infra-red devices, as dark conditions limit their ability to pick up on fine details in the distance.

With sufficient light added into the equation, the likelihood of thieves and vandals targeting your job site can drop and, on the off chance that they do target your site, the chances of their deeds being caught on camera are improved significantly.

It may seem like a no-brainer, but ensuring that surveillance systems are hooked up to a constant and reliable source of electricity is crucial. However, determining the best way to obtain that power can be tricky as it depends on the construction project at hand.

Options for high-rise commercial or residential builds include mounting surveillance systems atop on-site trailers or installing cameras at all four corners of the site. For low-rise residential builds, a few options exist: mounting the system on to a trailer; mounting it on to a temp pole; or mounting it on to streetlights. While each option presents unique challenges regarding ensuring the surveillance system receives enough electricity, it’s worth researching each option and consulting an electrician when possible. Our SentryPODS are ideal for any jobsite as their hot swappable batteries allow them to be placed anywhere.

Considering where security blind spots might be, understanding the distance between the camera and the area it is surveilling, and not skimping on the number of cameras used to watch over a job site are all factors that will ultimately result in a higher quality of surveillance received.

While surveillance systems are effective tools, if basic safety measures are not taken every day at a site, there’s nothing that a world-class surveillance system can do to deter theft. Between making sure that gates are locked at the end of each day and removing valuable personal items like laptops and cell phones from the site, complementary security measures may seem like common sense but they will help maximize the efficacy of a surveillance system.

If you’re in need of rugged, reliable security cameras for your jobsite, our line of SentryPODS cameras and equipment is sure to have exactly what you need.