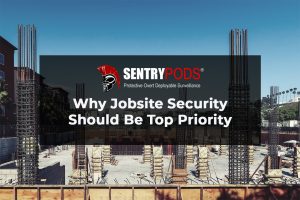 With all the dirt and grime that comes with construction, you might not think that a work site is worth
much money. But when you consider the amount of money that it takes to hire entire crews of
construction workers and skilled tradesmen, buy large amounts of crucial supplies and materials, rent
the required heavy equipment, and hire contracted security guards to protect the site during off hours,
the costs start adding up significantly. And when you consider that America’s construction sector sees
annual losses caused by theft and vandalism that outstrip the $1.4 billion mark (with similar losses
enumerating $50 million a year in Canada), it’s easy to see why surveillance is a necessity for any site.

This was made obvious for a construction site and office at the Beverly Hilton Hotel in Beverly Hills,
California. In 2015, this site had been targeted by thieves twice in the span of two months – the first
time, the perpetrator was caught in the act, and the second time, the perpetrator was successful in his
heist but his likeness was caught on camera as evidence. During this second hit, officials reported that
between 5:30 p.m. and 8 p.m. on April 7, 2015 , a man dressed in construction garb visited the hotel’s
work site and adjoining office, where he looted hand tools and specialty equipment whose total value
exceeded $10,000. The man reportedly loaded his bounty of stolen goods into his awaiting white Ford
Taurus moments later and, quite literally, made off like a bandit.

Because the man accessed the site after construction workers had left for the day, no one could have
stopped him – and because he was dressed as a construction worker, he avoided detection by passersby when he was loading the stolen tools into his getaway vehicle. However, because his actions were caught on a high-definition surveillance camera installed at the construction site, officials had a better idea of who the suspect was and what he looked like. While the camera didn’t quite capture the Ford Taurus’ license plate, the footage of the thief’s appearance was clear enough that it was circulated by local news outlets in the hopes of catching the thief.

And that’s the beauty of surveillance: the sight of it in a store or at a construction site can often be
enough to deter many people from committing crimes and misdemeanors. But in the even that it
doesn’t deter a perpetrator from swiping some goods from store shelves or stealing expensive tools
from a construction site, surveillance provides construction companies and retailers alike an
opportunity to seek justice.

Without the hard evidence of seeing exactly how crimes like these occur, it can be difficult to track
down those responsible. But with potentially incriminating footage and undeniable proof of
perpetrators’ acts, appearance, and other identifying factors caught on camera, the chances of officials
catching thieves and putting a stop to their illegal acts may be that much greater.

If you’re in need of rugged, reliable security cameras for your jobsite, our line of SentryPODS cameras and equipment is sure to have exactly what you need.