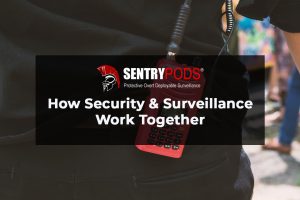 With valuable tools and equipment left out in the open, a construction site is ripe for the picking as far
as thieves are concerned – hence the importance of constant and visible onsite security. When it comes
to safeguarding against vandalism and theft at a construction site or workplace, security cameras and
guards are often a successful duo to deploy. But with security guards, the margin for error can be large
thanks to human error that is often exacerbated by low wages, odd hours, dangerous working
conditions, and the high potential for crime and assault that is part and parcel of the job.

Security guards work long hours at construction sites, with some shifts running from 4 p.m. to 8 a.m.
during the week – with the potential for 24-hour shifts during weekends. Oftentimes these shifts are
worked solo, with no one around to relieve guards for bathroom breaks or to provide first aid in the
event of a workplace injury. And with no coworkers to provide much needed backup coverage, guards’
attentions can often be divided once they sit down to write their shift logs or when they call their
supervisors for their regular check-ins, leaving a vulnerable security blind spot. With these distracting
factors at play, it’s little wonder that security officers are sometimes attacked, injured, or outright killed
while on the job. (Take, for example, the 2012 case in which a Port Coquitlam, B.C., security guard
was severely beaten and left for dead by three assailants at a construction site, or the 2006 case in
which a female guard in Calgary, Alberta, was raped by an intruder at an unsecured construction site.)

Add in the additional workplace hazards that include exposure to inclement weather and
harmful chemicals, traversing risky temporary walkways, and the risk of falling into open excavations,
and it’s easy to see that security guards have got their work cut out for them.

All of this conspires to create a perfect storm that negatively impacts North America’s construction
industry as a whole. According to SafetyLine’s article “Working Alone Perils Faced by Security
Officers (Guards) on Construction Sites”, losses caused by theft and vandalism in the Canadian
construction sector “is in excess of $50 million a year” – meanwhile, similar losses in American
construction surpass the $1.4 billion mark. It would appear that on top of all of the challenges faced by
overworked and underpaid security guards, one more challenge that may need to be addressed is how
to minimize these financial losses while protecting contracted security workers.

Advances in technology have made it possible for construction sites to have increased surveillance while
cloud-based check-in apps installed on security guards’ personal cell phones help to ensure that guards’
safety is being monitored regularly without creating any distractions while on the job. While
security guards have a lot stacked against them, these technological advances may help to improve
certain aspects of their jobs while cutting down on risk and loss in the future for their construction
clients.

If you’re in need of rugged, reliable security cameras to aid your security personnel, our line of SentryPODS cameras and equipment is sure to have exactly what you need.