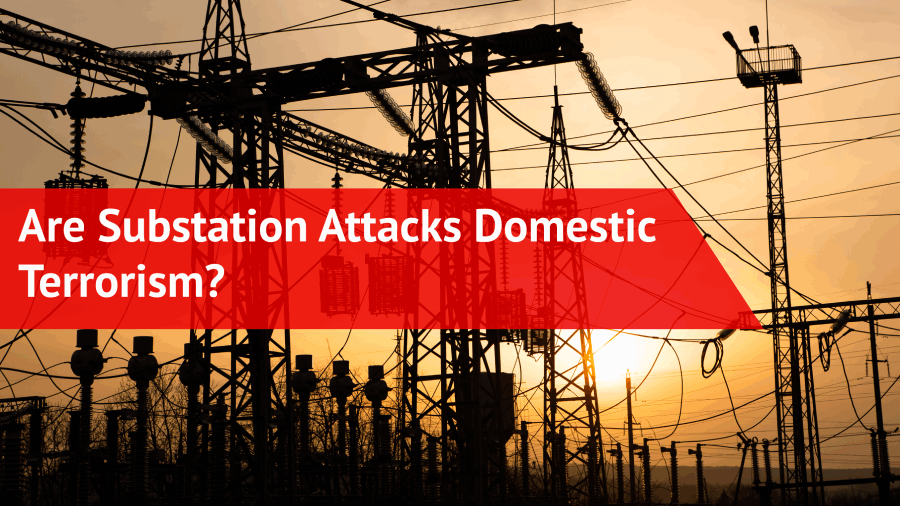 It has been over a month since the attack on an electrical substation in North Carolina, and almost a month since the attack in Washington state. It is unclear whether the two attacks are related, and both remain under investigation. Two men have been charged in connection with the attack in Washington, and so far no one has been charged in North Carolina. Read more about these arrests here. Both of these attacks left citizens without power for several days; Moore County, North Carolina was dark for nearly a week. Are these considered domestic terrorism?

These attacks are not unique; criminals have been targeting substations for quite some time. These attacks happen across the country, and are typically committed with firearms. Perpetrators shoot at the main power source for the substation, and this knocks out the power in the rest of the facility and in the homes and businesses that rely on it.

What is Domestic Terrorism?

Questions abound regarding these attacks, but the most pressing question is whether or not these attacks should be considered domestic terrorism. It is imperative to understand what domestic terrorism is. Domestic terrorism essentially boils down to the citizens of a country committing violent acts against their country. The FBI defines domestic terrorism as: “Violent, criminal acts committed by individuals and/or groups to further ideological goals stemming from domestic influences, such as those of a political, religious, social, racial, or environmental nature.”

Are these attacks domestic terror attacks?

Motives have not been determined in either of these most recent attacks, but both attacks can be considered domestic terrorism. The men who attacked the grid in Washington are from an adjacent county. It is a safe assumption that the perpetrators of the North Carolina attack are also from North Carolina. These attacks were perpetuated by American citizens to cause harm and destruction to other Americans. The attacks not only left people in the dark for days— they put lives at risk. People who depend on electricity for medical devices were stranded without access to their life-saving devices.

How to prevent domestic terrorism at your substation

SentryPODS surveillance cameras continue to grow in relevance. Our cameras require no wires, have hot-swappable components, include a cellular connection, can post to solar trailers, and will set up in 3-5 minutes (video streaming is pre-configured before shipped to your site).